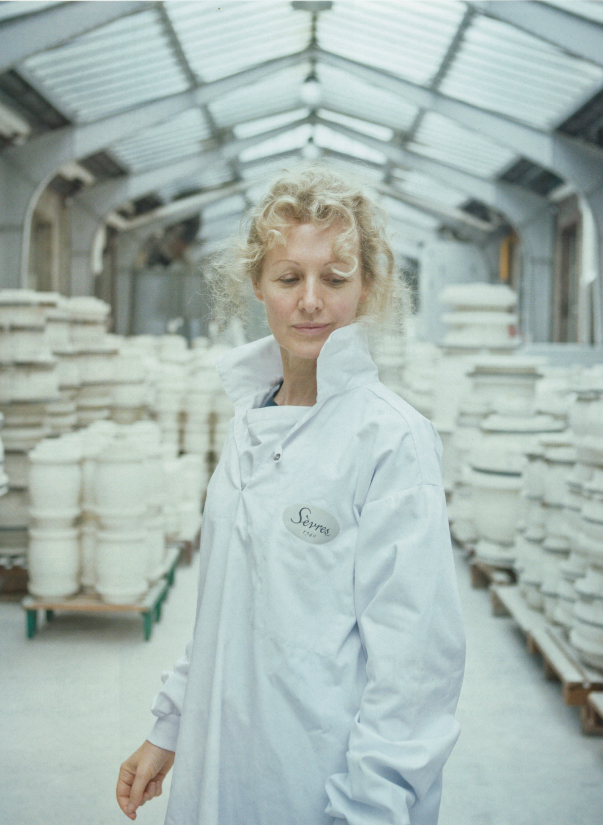 Annabelle d’Huart is a multi-disciplinary artist. Throughout her career, she has been a photographer, painter, sculptor, designer, jeweller and in the past decade, she has focused on pencil drawings. While all these disciplines are radically different one another, her works can be linked in terms of theme, shapes and colour palette, and each change is a logical progression in her artistic journey.

Her first exhibition in 1990, Atlantis (Atlantide), was at the Pierre Passebon gallery. Mediterranean frescoes inspire the series of seven large-scale gouaches, but the meaning goes far deeper. Atlantis is an odyssey through time and reveals glimpses of this ancient civilisation as it is slowly submerged in water or dried out by a desert. The fragments lost are like the memories lost by an amnesiac. Each of these gouaches then became the template for a carpet produced by the Friends of the National Museum of Modern Art. The same themes surrounding erosion, archaeology and the oceanic universe reoccur in a porcelain service also titled Atlantis, created at Sèvres – Ceramic City between 1996 and 2006.

Inspired by the minimal artists she photographed between 1976 and 1978, Annabelle explored the idea of seriality and created Golden Reveries or the Dreamed Origin (Songes d’or ou l’origine rêvée) in 1996 and Goddesses (Déesses) 1999. Golden Reveries or the Dreamed Origin is an installation presented at the International Center for Contemporary Art and Landscape of Vassivière in 1995 and the following year at the Montenay-Giroux gallery in Paris. It is composed of twenty-three terracotta and gilded bronze vases, standing on rusty tripods varying in height, set on a rectangle of finely sifted earth which measures 4 meters by 8 meters. The work toys with the idea of form. Though similar, each vase is slightly different from the next, the sizes vary, the handles change shape and the silhouette of the body shifts. Perched on these thin metal stems, it is almost as if they are floating. It is as if the viewer is inside the mind of someone who is trying to remember a vase they glimpsed and we see all the permutations their mind has created. The work reveals the asymmetry between vision and memory and captures the precise moment between memory and imagination.

Goddesses (Déesses) is an installation which was shown at the Menara Pavilion in Marrakech in 1999. The piece encompassed twenty-four human height sculptures made from cedar wood and coated in white gesso. Surrounding and reflected in a midnight blue pool, the Goddesses are stretched thin with razor sharp edges and each has been lacerated down the middle and yet, they all strong, beautiful and stand perfectly en pointe. It is a reaction to the soft and round representation of women found from classical art all the way to the twentieth century, and yet, is distinctly feminine. The precision needed to balance on a needle point while cut in half highlights Goddesses’ power. The installation was inspired by a Sir Isaac Newton quote: “The stars are like an array of needles all standing upright on their points, each ready to fall one way or the other at the least disturbance”. By suggesting that stars are fragile, that their flickering goes hand in hand with their twinkling, and that their equilibrium is just as precarious as ours, Goddesses references two fundamental facts of our time: fragility and precision.

In 1991, Annabelle launched herself into jewellery because in her words “our era lacks treasures”. She began with Talisman, a necklace of ebony and silver spheres connected by elliptical rings. The silver part of each sphere is delicately sculpted to resemble the surface of the moon, with all its hills and craters, and as a whole, the necklace accurately depicts a complete lunar phase. The Friends of the National Museum of Modern Art commissioned the piece which became part of the collection of the Guggenheim Museum in New York. Later, Maison Chanel commissioned her to produce unique pieces which were used their haute-couture fashion show in 1999.

Defying the norms of conventional jewellery making, Annabelle used jewels like watercolour paints, in a way devoid of hierarchy. The result is a series of one-of-a-kind pieces, which combine materials rarely seen together, such as sea glass set in gold. As much art as jewellery, every necklace enjoys a bespoke bronze bust to hang from and each has its own story. Annabelle worked alongside award- winning writer and poet Marc Cholodenko to create poetic titles, such as Jules Verne’s Fish or the Intoxication of the Depths or The Candy Cane Empress, and tales, sometimes just snippets of tales, for every piece. Their collaboration was made into a catalogue for her exhibition Gems (Bijoux) 2003 at Galerie Mougin in Paris.

The same year, Annabelle was commissioned by Sèvres – Ceramic City to decorate a cup and saucer created by Émile-Jacques Ruhlmann as homage to the late Art Deco designer. To pay her respects, Annabelle decided to superimpose Ruhlmann’s own blueprint on to the cup and saucer. Thus the sliver of blue reveals the angle of the curve while the grey lines show the proportions and design. Just like Atlantis, Homage to Ruhlmann (Hommage à Ruhlmann) reflects on the nature of time. Looking at the piece, we can see the Ruhlmann’s sketch and its execution simultaneously, it is almost as if Annabelle sealed a time loop in an object.

In 2007, the luxury pearl company Mikimoto partnered with the fashion designer Yohji Yamamoto, create his first line of designer jewellery. Yamamoto commissioned Annabelle to do the design and thus Stormy Weather was born. The collection mixes white gold with a variety of pearls. Like much of her previous work, Annabelle created a story to accompany the collection. She imagined that the moon’s tears that would fall from heaven at night on to the surface of the sea and find their way inside the oyster shell to create a pearl. Although not all pieces are set with pearls, all are reminders of the mystical role nature plays in our lives.

That same year, Sèvres – Ceramic City commissioned Annabelle to create their first collection of porcelain jewellery-sculptures titled Flotsam (Choses de flot et de mer). For her third collaboration with Sèvres, she created three hundred unique pieces, fashioned from hard and soft paste porcelain, which seem as though they were sculpted by nature itself. The jewellery is inspired by marine life, the reading of Victor Hugo’s novel Toilers of the Sea (Travailleurs de la Mer), as well as her experience beachcombing in Yemen in 1993. She conceived Flotsam as a love letter to the seaside, composed of necklaces, brooches, earrings, pendants and other pocket jewels. Many of these jewels, such as Flotsam No264 or Fairy of the Pearl Cavern No70, are so shiny that they look wet, like colourful pebbles you might see glistening under a the ripple of a wave. Flotsam was shown at the Museum of Decorative Arts in 2008 and again at Galerie Anne-Sophie Duval in 2010. In 2013, seventy of the three hundred pieces of jewellery became part of the Museum of Ceramics in Sèvres’ collection and are now permanently on display.

Following the completion of Flotsam, Annabelle decided to create an artists book documenting her ideas and experience. Also titled Flotsam, the book reveals in detail the different sources of her inspiration, her original notes, drawings, photographs, collages, paintings, as wells as reworked and new drawings and paintings and even x-rays of the jewellery which shows how the necklaces are linked and fastened. The book was published in 2013 and became itself the subject of an exhibition at the Pixi gallery.

In 2007, the French bureau of state-owned furniture (Mobilier National) commissioned Annabelle to do a project involving textiles. For this project, she created five drawings based on a series of photographs she had taken of parasol pine trees in the small commune of Cerveterri in Italy. Looking up she had been struck by the network of slender branches and leaves gracefully intertwined against the clear blue sky. The forest’s foliage had become a veil for the heavens. To create Heavenly Laces (Dentelles du ciel), the lace- makers of Le Puy used Annabelle’s drawings and reproduced the effect with textiles. The five panels of Heavenly Laces are have been exhibited at the Ministry of Higher Education and Research and are now permanently on display in the French Embassy in Beijing.

Between 2009 and 2012, Annabelle produced a collection series of large-scale pencil drawings on ingres and Korean paper, titled Sea Princesses. The drawings are strikingly delicate and complicated. From far, Sea Princesses appear blurry, as if Annabelle managed to capture mist or a cloud on the paper. Up close however, the work comes into focus and evolves into an extremely complicated medley of pearls, bubbles and curves. The series was on show at Piasa in 2016 (White cube gallery), and at the Pierre Alain Challier Gallery in 2019.

In 2013, Annabelle received a knight award from the Order of Arts and Letters (Chevalier des Arts et des Lettres) for her contribution French cultural inheritance.

In 2014, the Museum of Decorative Arts in Paris put on a show, In the Line of Fire (Dans la ligne de mire), which featured Black Sea Princess and an installation titled Foreshore (Laisses de mer). Based on a negative of a drawing, Black Sea Princess is a large-scale white embroidery on a black tweed. The piece was handmade in the Cornely technique and executed by the embroiders at Broderies Gouvernel manufacture. To create Foreshore, Annabelle got in touch with a fisherman who saved and dried bits of rope that he found washed up on beaches. The embroiders plaited the ropes together using a variety of sailors knots to create a twenty-four metre textile necklace to which Annabelle hung jewellery from the Flotsam collection. The pastel blue, green and orange weather-worn ropes give the necklace a natural quality, and yet, Foreshore’s size and the glistening jewels make the installation seem otherworldly.

In 2015, the French bureau of state-owned furniture commissioned Annabelle for a second time. This piece would be the beginning of a new emersion into colour for her. Annabelle drew a design, which was transformed into a very large carpet at La Manufacture La Savonnerie. The carpet displays multiple brightly coloured fragments of seaweed à la Henri Matisse. Shallows (Les Hauts Fonds) took two years to complete and was unveiled in a ceremony with former president of France, François Hollande, in May 2017.

Between 2015 and 2019, Annabelle returned to the idea of seriality and completed Shitao, a series of seven large-scale paintings (190cm x 290cm), inspired by the writings of the Chinese philosopher and painter Shitao who wrote about the importance of the single stroke. Each canvas was coated with multiple layers of Meudon white paint, which created a surface similar to the stucco but also to that of Sèvres biscuit porcelain. On this surface, Annabelle painted a single multi-coloured line which meanders around the canvas. The colours flow effortlessly into one another, giving the impression that Annabelle genuinely painted it in a single stroke. Additionally, using shadows and almost imperceptible differences in the warm and cold white in the background, the line appears free, as if it is floating and moving in midair. The work is simultaneously so fluid and so airy that it could be described as liquid light. Four of these paintings were shown in the group show The Experience of Colour (L’expérience de la couleur) at the Ceramics Museum in Sèvres in autumn 2017.